The causes of the 1905 Revolution

Russia was ruled by an autocratic monarchy which was ruled by the last Tsar of Russia, Nicholas II. An autocracy is a term meaning that the person in charge or the group in charge has absolute power over everything. Nicholas II thought that he was God’s chosen leader for Russia. This means that every important decisions that occurred wasn’t decided by the people it was decided by the Tsar himself.

The other problem with this is that the country was too large to be governed by one man. Therefore he hired some civil workers to help him run the country and use them to help the government. But considering that these workers were poor and had low income this had led to corruption within the system. 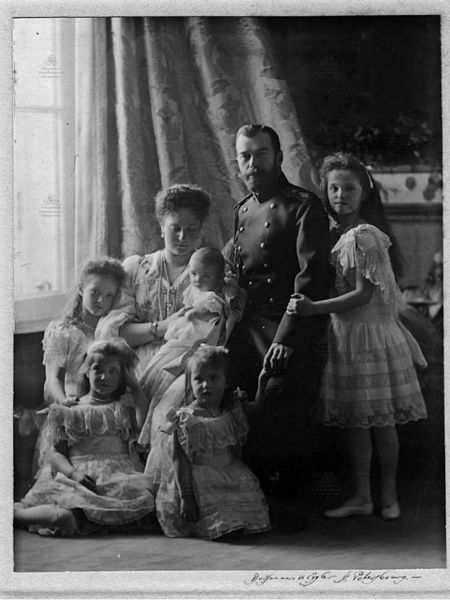 The photo of the Tsar with his family, circa 1904. Source

There was no party or a system to get the voice of the people. The country has no way for its opinions and views to take part on politics because of a strict censorship in media and a brutal secret police that was in Russia to avoid any criticism and disagreements with the Tsar. This had ended up with newspapers and books being strictly censored by the government and anyone who opposed the Tsar and his views were either exiled to the Serbian prisons or jailed.

The government had made a ruckus with the peasants in the country by trying to develop its industries. The government goal was to have some kind of change from an agricultural country to an industrialised one and to remain to have a strong military army. So their plan was to finance a vast amount of wealth to the development of the industries. But the only way to get money was through the Russians.

The peasants had the greatest impact on this decision because everyday items such as grains, vodka and salt had increased in prices due to the Tsar implementing a heavy tax on these everyday items. This was the strategy that they used to squeeze every single cent out of the peasants so that they can develop their industries in Russia. They thought that if they changed the country to a fully industrialized one, this will mean that everyone will be better off in the end.

Their plan was working with the industry growing quickly and there was a development in the industries. Until 1902, when most of the workers around western Russia had lost their jobs due to a problem with the industries. In the cities there had been strikes and demonstrations set by the workers. Outside the cities, the peasants were suffering from this taxes and terrible crop for almost two years. Peasants had been pushed to a point that they cannot survive anymore. Violence ensues around the countryside followed by peasants burning down and destroying the noblemen’s property and homes.

They made the matter worse by getting the troops involved by attacking the people who were creating disturbances and riots in the streets. This had increased the amount of protests, strikes and demonstration in the cities from 1902 to 1903.

The doubts towards the Russian Tsar, Nicholas II, has amplified because of the Russo-Japanese War that occurred due to a conflict over the land in Manchuria. The Japanese wanted to conquer this land, but the Russians wanted this land because they wanted to build a railway across Manchuria. The Tsar thought this was a great idea to get his troops to fight against the Japanese because a quick victory against the Japanese will stop the doubts on the Tsar.

But in the turn of events, this small country had severely defeated Russia at the time which ended up with a lot of people distrusting the Tsar and thinking that he was not fit to rule. And to add to that, with this war going on the food supplies and goods had decreased dramatically and with the lack of resources for the industry many workers had become unemployed which increased protest on the uselessness of the Tsar.