The Society of Russia

In the twentieth century, Russia has a massive wealth gap between the different social classes. There were about 20% of the entire population of Russia was rich and the rest were either poor peasants or tired workers in the industrialised factories of Russia. There were four distinct social classes that were in Russia during the 1900s, these were the peasants, workers, the middle class, and the nobility. 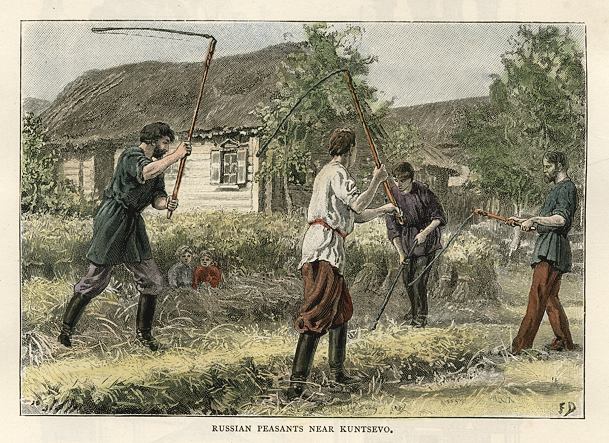 A representation of the Russian peasants near Kuntsevo, 1889. Source

Life was a difficult task for peasants in the early twentieth century of the Russian Empire. They lived a life filled with diseases, hardships, and poverty. These people had backbreaking and difficult jobs in their farmlands so that they can support their family and feed them. Their main food source was vegetables, grains, and fish. They would mainly eat bread made from the grains, porridge, and soup. Fish was a common dish that they can gather in these parts, but the meat was a challenging ingredient to acquire.

When the climate was right and the crops that they grew were successful they would have enough food and consequently increases the chances of survival of the peasants. But when their crops went bad because of bad weather or other factors they would go into a state of famine. They would either starve to death or be killed by a lethal virus that had spread around the peasants at this time. Diseases such as typhus, diphtheria and even syphilis were some of the viruses that infected thousands of peasants that resulted in the death of thousands of peasants. In the year 1891, there was a report that over 400,000 peasants had died due to cholera and the crop failure. This was the severity that the peasants had to go through during the twentieth century.

The land was another problem that the peasants faced during the late nineteenth century and the early twentieth century. There was not enough fertile land for the thousands of peasants living in Russia and the Russian peasants also faced with an overwhelming debt that the government gave them when they abolished slavery in Russia. Before 1861, the Russian nobles or masters had owned Serfs, an unfree peasant, who had worked for them in their land. But at the year 1861 the government had abolished slavery and gave the peasants a land of their own, but they had to pay off the land that they were given which resulted in the poverty of the Russian peasants. The nobles had kept a lot of land after 1861 which ended up having a lot of peasants getting frustrated and angry also it led to some of the peasants working with the nobles to earn some extra money. The situation gets worse during the 1900s because there was an increase in population, which had brought a rise in competition over the lands between the peasants.

These were peasants that had moved to urban zones in Russia and worked in the industrialized workplaces like metal factories or textile factories. Both the men and women worked effortlessly in these factories 24 hours each day. Their life was as difficult as the peasants living in the countryside they had jobs that were excruciatingly tiring and demanding. They usually worked for more than 15 hours each day and had a low minimum income. They would typically would eat the same as the peasants in the countryside which were soup, porridge, and bread and they would wash their food down with a nice warm bottle of vodka.

Their living conditions were even worse than the jobs that they had. They would live in barracks quite close to the factories that they worked in. In these barracks, there would be a cold and dark hall that led into residences that would house more than 30 people at a time. The spaces between the rooms were just separated with a long piece of sheets or weak wooden pieces which gave these people little to no privacy at all. Everything was seen by other people and everything they did was known by the other workers. Two workers owned the same bed, with one worker working during the day and the other during the night.

These were the group of people that were on the other side of the wealth gap. These were the new type of social class that appeared in the 1900s and it was growing quite rapidly which was the Middle Class. These were bankers, merchants or rich capitalists who owned the industrial workplaces and factories around Russia. The middle class also had a strong bond amongst the government of Russia, which made it possible for the government to loan huge sums of money and large contracts to these people.

Their lives were a lot easier for them. They go to restaurants that serve expensive and luxurious dishes such as caviar and salmon. They would drink champagne instead of the cheap vodka. They would have large houses or manors that were fully furnished with expensive furniture and decorations. In their past-time, they would visit the theatre or concerts that were in the cities or watch an extravagant performance of the ballet.

These were rich and important people in Russia. The nobles only made up one percent of the population, but they owned about one-fourth of the fertile land in Russia, which was quite problematic for the peasants living there at the time. They owned a vast amount of wealth and they usually own large country estates that have people running them. These people were rich enough to have two or more houses that would be built in Moscow or in St. Petersburg and they would spend most of their free time to go on ballet performances, go to the theatre and concerts.